Phyllis Tate was one of the most prominent British composers of the second half of the twentieth century. Her music was widely performed during her lifetime and received great critical acclaim. Her musical output was extensive and varied, ranging from music for schools to her opera The Lodger. Her fascination with musical textures led her to explore the potential of unusual instruments and combinations which tended not to be readily accepted or easily available for performance. These instruments included the saxophone, the celeste, the bass clarinet, the accordion, the lute and the harmonica, and the parts were often written for a virtuoso of the specific instrument. Such instruments were often used with her other lifelong musical passion, the human voice, in settings of poems from which she gained much inspiration.

Phyllis Tate was highly respected by contemporary musical peers for her idiosyncratic musical imagination, her unique sensitivity to musical colour and her fastidious craftsmanship. All these qualities are exemplified in two of her best-known works: the Sonata for Clarinet and Cello, and the Nocturne for Four Voices, her setting of a poem by Sidney Keyes, who perished in World War II. Many critics commented on her originality and refusal to go along with fashionable trends of writing music for the musical elite of her time. In fact much of her music has a robustly popular appeal, notable examples being her orchestral suite London Fields, her setting of Charles Causley’s poem Saint Martha and the Dragon and her Concerto for Alto Saxophone and Strings.

She was modest and intuitive, and not given to theorizing about her own compositions or contemporary music in general. She refused an offer of a professorship at the Royal Academy of Music, as she firmly believed that musical creativity could not be taught. We, as her descendants, feel that her musical legacy has been unjustly ignored and hope that this website will promote greater awareness of her unique contribution to twentieth-century music. 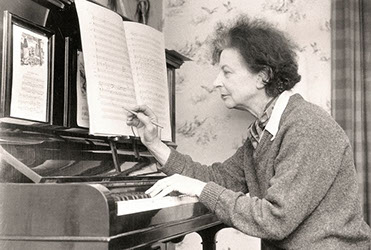 Throughout her life Phyl, as she was known to her many friends, was inspired and encouraged by her husband Alan Frank. Alan was her most trusted mentor and critic, and both he and Phyl were at the centre of London’s post-war musical life, forming deep friendships with many prominent contemporary musicians. Phyl also collaborated with several outstanding artists of the time such as poet Charles Causley, author Michael Morpurgo, performers Cleo Laine and John Dankworth, cellist William Pleeth and saxophonist John Harle.

This site is the result of a happy confluence of the interests, talents and enthusiasm of several people: Phyl’s principal publisher, the Oxford University Press, who have supported us wholeheartedly in this project; Jane Ballantyne, who is writing her MA dissertation on Phyl’s techniques of composition, and who has generously shared her research and insights with us.

We had many recordings in the family collection that we have had digitised in order to include excerpts on this website; a few are commercially available. Most of Phyllis Tate’s music is still in print and published by the Oxford University Press. For anyone wishing to hear complete performances or study manuscript scores, both the British Library and the British Music Collection at Heritage Quay have a substantial collection.

Any information from this site can be used, with acknowledgement, as programme notes.