St. Martha and the Dragon

One of Phyllis Tate’s last choral works, this is a setting of a dramatic narrative poem by Charles Causley which re-tells in direct and vivid verse the Provencal legend of St Martha saving the people of Tarascon from a monstrous dragon by gentle persuasion and the power of love. This work was commissioned by the Barnet and District Choral Society and funded by the Arts Council. With a humourous touch typical of Phyllis, the musical notes B, D and C feature prominently in the score. Phyllis was President of the BDC, and an enthusiastic supporter of, and composer for, such amateur organisations. The work’s first central London performance was by the BDC at the Queen Elizabeth Hall in 1978. It is scored for narrator, soprano, tenor, children’s and adult choruses, and chamber orchestra with prominent percussion.

For Phyllis, this work marked the start of a fruitful working relationship with Charles Causley. They shared a similar approach to their respective arts, and a sincere warmth and appreciation of each other’s work is evident in their exchange of letters, two of which are reproduced here in facsimile.

A Cornishman, Causley was a modest and very private man, but his writing is vigorous, direct and aimed at popular appeal. According to Wikipedia ‘His work, influenced by W. H. Auden, is intensely original and many consider him to be, as Betjeman was, a man working outside of the dominant trends of the poetry of his day. Because of this, academia has paid less attention to his work than it might have done. His popularity, particularly among the Cornish, remains high.’

His close friend Ted Hughes said of Causley: ‘Among the English poetry of the last half century, Charles Causley's could well turn out to be the best loved and most needed … Before I was made Poet Laureate, I was asked to name my choice of the best poet for the job. Without hesitation I named Charles Causley - this marvellously resourceful, original poet, yet among all known poets the only one who could be called a man of the people, in the old, best sense. A poet for whom the title might have been invented afresh. I was pleased to hear that in an unpublished letter Philip Larkin thought the same and chose him too.’

In a letter to Phyllis dated December 27th 1975 Causely welcomed the idea of her setting ‘St Martha’ as ‘marvellous: for me this is quite the most exciting news I have heard for a long time’. He was equally enthusiastic about the completed setting, which in a handwritten letter on October 8th 1984 he described as ‘absolutely stunning, and I enjoy it more every time I hear it: discover new perceptions, depths, insights in your most wonderful interpretation.’

The professional reviews were also good:

‘She has handled her story with considerable skill and command of local colour…with the narrator being used to finely dramatic effect’ (The Daily Telegraph, 6 March 1978).

‘The idea of composing new works especially tailored to the needs of talented amateur performers is wholly admirable. St Martha and the Dragon gave me far greater musical pleasure than many of the more ambitious first London performances I have attended in recent years’ (Frank Granville-Barker, Music and Musicians, 19 June 1978). 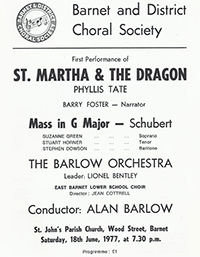 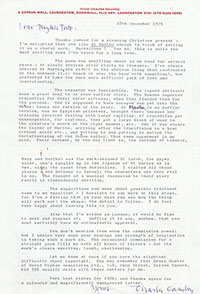 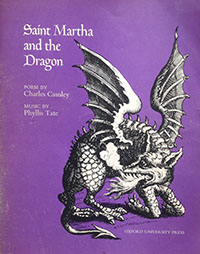 Letter from Charles Causley to Phyllis 1975 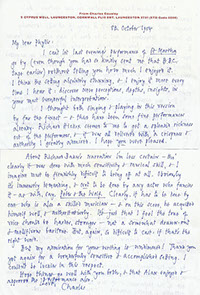 Letter from Charles Causley to Phyllis 1975

A Secular Requiem (The Phoenix and the Turtle)

○ A Secular Requiem (The Phoenix and the Turtle)

1961 recording from vinyl in family collection

This setting of a poem attributed to Shakespeare was subtitled ‘The Phoenix and the Turtle’ and has, unusually for Phyllis Tate, two versions. The original was first performed at a BBC invitation concert in February 1961, and was scored for tenor voice, flute, horn, two cellos, and two keyboard instruments: piano and harpsichord, ‘whose similar yet contrasting timbres lend highly individual colour to the score’ (Martin Cooper, The Daily Telegraph). The second version, first performed at the Hampstead Music Festival in 1967, was scored for chorus, double wind, trumpet, trombone, four cellos and organ.

The poem itself is enigmatic and has had various metaphysical, allegorical and historical interpretations. In Egyptian mythology, the phoenix was a bird that lived five hundred years, then died in a fire after the sun ignited an Arabian tree on which the phoenix was perched. From the ashes, the phoenix rose to new life. The turtle is a turtledove, an affectionate wild dove known for its plaintive cooing.

Among the more intriguing interpretations is that the birds represent Queen Elizabeth I and the Second Earl of Essex, Robert Devereux (1566 -1601). He became a favourite of the queen, but led an unsuccessful uprising against her and was executed for treason in 1601. The poem could mean that the love between Elizabeth and Essex simply burned itself out, like the phoenix and the dove in the poem. However, the Shakespearean scholar G. B. Harrison maintains that the exact meaning of the poem may never be revealed because its symbolism was apparently known only to a select inner circle in Shakespeare’s time. ‘Until these persons and events are discovered,’ Harrison says, ‘“The Phoenix and the Turtle” will remain an enigma’ (Shakespeare: The Complete Works New York: Harcourt, 1952 p1590). The poem begins when other birds are summoned for a funeral pageant. Banned from attending are the fiendish screech owl and ‘fowls of tyrant wing’. But the eagle, a ‘feathered king’ is welcome, and a swan is to act as ‘the priest in surplice white’. The crow, too, may attend, his caws and sable feathers appropriate to the occasion. The poem then recounts how the phoenix (female) and the turtle dove (male) become one in their love and die together in a fire, but for Shakespeare no other phoenix arises. Allegorically, the theme is rich in poetic associations: human passion consummated by death after a perfect union; beauty represented by the phoenix and truth by the turtle – and our loss by both their deaths; love transcending nature and reason, but only finding the peace of death, not renewed life. The poem ends with a ‘threnos’ (funeral song) eulogizing the birds.

Nearly all the reviews of both versions noted the directness of the setting and the apt and imaginative music, instrumentation and scoring. Of the original version for tenor and chamber ensemble Martin Cooper wrote, ‘The enigmatic allegory is observed, as it were, from the outside. Miss Tate has wisely preferred to illustrate the imagery or recreate the verbal effects in music rather than to interpret the poem’s emotional significance – at least until the final Dirge, which thus gains greatly in meaning. The spare texture and its subdued though singularly apt colour-scheme throw an unusually large responsibility on to the singer’ (The Daily Telegraph, February 24 1961).

Another reviewer in The Listener (August 23rd 1961) wrote that ‘this proved to be a most unusually attractive work, very atmospheric and highly original. The clever writing for the unusual combination of instruments results in a lovely texture … and an added piquancy which seemed to enhance the mysterious character of the words.’

Of the choral version, Felix Aprahamian wrote that ‘Miss Tate clothes Shakespeare’s semi-philosophical disquisition on the nature of love with her most harmonious choral writing …The piece is unusual, but a gem of its kind’ (The Sunday Times, 16 February 1969).

Another reviewer (M. R. C. 16 February 1969) referred to the ‘Miss Tate’s richly suggestive music, particularly in the closing Threnody, with its subtly pointed antiphony between instruments and voices …’ 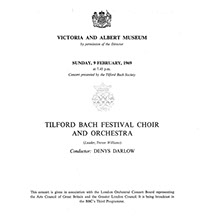 Concert at the Victoria and Albert Museum

‘A Secular Requiem (The Phoenix and the Turtle)’ music by Phyllis Tate, words attributed to Shakespeare © Oxford University Press 1970.

‘A Secular Requiem (The Phoenix and the Turtle)’ music by Phyllis Tate, words attributed to Shakespeare © Oxford University Press 1970.

Concert at the Victoria and Albert Museum