Programme from 2012 performance at St John’s , Smith Square, London, by The Phoenix Orchestra

Thanks to Chorley's for providing this image

Phyllis Tate’s orchestral suite London Fields was commissioned in 1958 for the BBC Light Music Festival. She did not write many works that would fit into the ‘light music’ category and London Fields was her major contribution to this genre.

She said at the time of the first performance ‘ … my first and conscious aim was to please and entertain’, and in this she was entirely successful. The suite has been performed frequently both during her lifetime and since her death. It has also been recorded several times and is still available on CD.

There are four movements in this work, which lasts for thirteen minutes: ‘Springtime at Kew’, ‘Hampton Court - the Maze’, ‘St James’s Park - a Lakeside Reverie’ and finally ‘Hampstead Heath - Rondo for Roundabouts’. The music takes the listener on four thoroughly enjoyable excursions to much-loved areas of London. It is extremely evocative and reflects Phyllis’s lifelong appreciation of the city where she spent all her adult life. The last movement is particularly personal: Phyllis spent her last forty years living near the lower end of Hampstead Heath where the fair would arrive every Bank Holiday and transform the area.

Edmund Whitehouse, assistant editor of This England magazine, wrote an article about Phyllis Tate in which he says ‘One of the author’s favourite pieces is the delightful four-movement suite London Fields. With the help of a privately recorded performance he used it to introduce a class of inner-urban schoolboys to music more serious than the contemporary pop to which they were more accustomed. As each of the movements unfolded, so the children were invited to sketch what came into their minds. “Springtime at Kew” evoked daffodils and crocuses; “The Maze at Hampton Court” produced all kinds of curly-wurly shapes; “St James’s Park - A Lakeside Reverie” resulted in ducks and swans swimming a-plenty while the grand finale “Hampstead Heath - Rondo for Roundabouts” brought forth all sorts of helter-skelters, dodgem cars, candy floss, toffee apples and the like. The icing on the cake came after the fourth week when a small boy approached me at the end of the lesson and said “Please sir, I lIke this music, can you do a recording for me?” He got his recording and for all I know he is, like me, still playing it.’

London Fields is uncharacteristic of her work as it is unashamedly optimistic, romantic and joyful, without the dark moody undertones present in the majority of her compositions. However, the wit and playfulness that runs through all her work is as much in evidence as her skilled craftsmanship. Her other compositions that have been considered as ‘Light Music’ are ‘A Song Without Words’ for orchestra (from Duo Concertante), ‘Illustrations for Brass Band’ and ‘A Seasonal Sequence’.

All available from presto  www.prestoclassical.co.uk

Concerto For Alto Saxophone and Strings 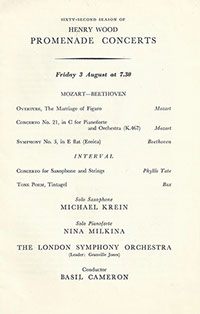 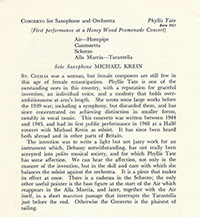 Programme notes from the above

Programme notes from the above

The Saxophone Concerto, commissioned by the BBC in 1944, was Phyllis’s first major success, and showed her talent for and interest in exploring the potential of unusual and unfashionable instruments.

Both she and Alan had a lifelong interest in jazz and popular music, perhaps nurtured by their playing together in pubs during the early days of their marriage, on ukulele and clarinet respectively.

As an instrument the saxophone, despite having been developed early in the nineteenth century, had never become an accepted or respected member of the orchestra. Apart from pieces by Debussy and Glazunov, it had been used mostly for its sardonic quality, notably by Vaughan Williams in the Dance of Job’s Comforters.

The reviews of the concerto were enthusiastic about the work, but ambivalent about the instrument:

‘... exploits, with charm and light touch … the best qualities of that spiv-like instrument: its irrepressible bounce and its slightly pathetic hankerings after lyrical beauty’ (New Statesman 9 July 1949). ‘Music that intrigues the ear with its unfailing cleverness, whimsicality and varied rhythms’ (Musical Opinion, March 1951). ‘... the soloist, Rinus van Zelm, produced a tone whose quality and quantity almost obliterated the unfortunate associations of the saxophone … the work as a whole is markedly individual in its serious, but quite unportentous, treatment of simple, almost trivial-seeming material, the skilful handling of the orchestra and the exploitation of all registers and characteristic quirks of the saxophone’s much abused character’ (Spectator 30 January 1951).

Various well-known performers have played the concerto, notably Michael Krein, and the above-mentioned Dutch virtuoso Rinus van Zelm, with whom Phyllis and Alan formed a lifelong friendship and to whom the composition is dedicated. More recently it has been performed by John Harle and John Dankworth and in 2018, the first commercial recording of it was released, performed by Olli-Pekka Tuomisalo and his Orchestra. In the first performance the soloist was Michael Krein, accompanied by the Boyd Neel String Orchestra.

Programme for the first City of London Festival 1962

Programme for the first City of London Festival 1962

Duo Concertante was written for bassoon, trumpet and chamber orchestra. It was first performed in July 1962 at Fishmongers Hall, London, as part of the first City of London Festival.

The composition was reviewed in the September 1962 issue of the Musical Times: ‘This is a light agreeable piece in four movements, based on Miss Tate's gift for “popular tunes”. It is not a common gift today, at least among serious composers. Malcolm Arnold has it; but Tate does not sound like Arnold. He in his presentation of the material recalls Mahler, she early Stravinsky and Prokofiev. Duo Concertante consists of tunes presented with a neat, clever, musicianly technique. The trumpet leads the band; the bassoon follows after; and the strings accompany mainly. The first movement, an Aubade, needed a contrasting idea to set off a good one that was heard once too often. The Scherzo becomes waltz. The slow movement “A Song Without Words” is made up of one of those lowest denominator tunes, which - whether invented or borrowed - one feels sure one must have known since childhood; it is put through its unhurried paces in ingenious Copland-like fashion. The finale “Marche Militaire” is bright and Prokofiev-like. In fact the Duo Concertante shows Miss Tate in eclectic mood, happily exploiting the various successful veins to which she has access. Cheap? Well, yes. Pretentious? No. It was written to please, and please it should.’

There seems to be very little information anywhere about this piece. Phyllis lived in London all her adult life and loved the city; to have been asked to write a piece for the very first City of London Festival would have pleased her greatly and she would have wanted the composition to have a wide appeal. We do have a recording made in 1964, featuring renowned musicians Archie Camden (bassoon), David Mason (trumpet) and the St Cecilia Orchestra.

Programme from 2012 performance at St John’s , Smith Square, London, by The Phoenix Orchestra